Dismantling  was presented as part of A Planned Disappearance, an event hosted by the Department of Architecture at CCA.  The event took place at Proxy in the Hayes Valley neighborhood of SF.  In their own words:

“A Planned Disappearance of is an exhibit on temporary structures. The second in DoA’s series of pop-up architecture events, it aims to craft a moment of cultural intensity and civic dialogue within San Francisco.

A series of performances, talks, and installations will address how artists and architects incorporate material efficiencies, modular systems, and new technologies to adapt to limited schedules and resources. We will look at how the formalization of these broad themes has opened up opportunities for radical experimentation in the design of non-places and how the planned obsolescence of our surroundings, through digital ephemera and transient occupancy, creates active topographies.”

Dismantling was displayed on headphones, with a total of five stations installed on the bollards that demarcate the NW boundary of Proxy. 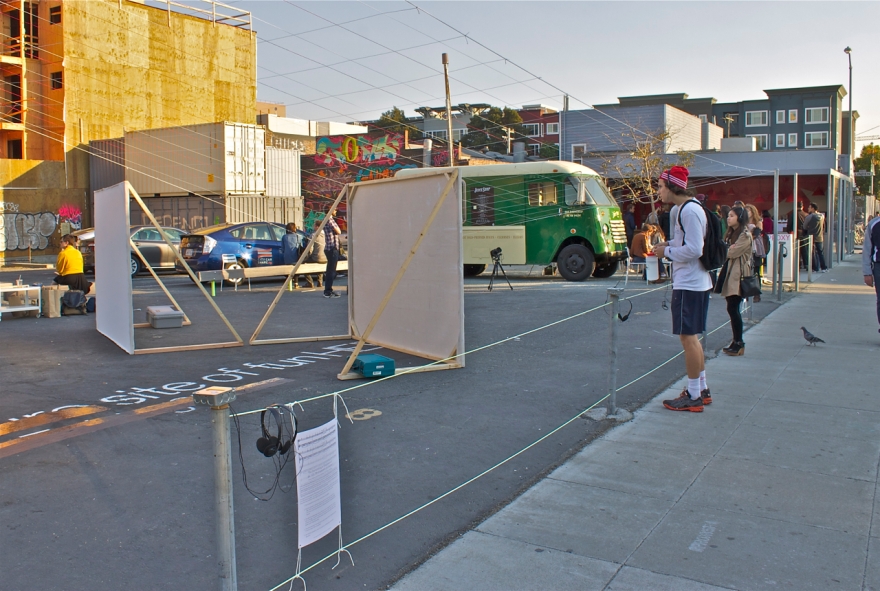 Our piece explores the fleeting nature of the aural experience by deconstructing a long-standing method of trying to make that experience repeatable: the musical score. The score provides a musician with a set of instructions – where and when to place the fingers, and with what kind of force and expression – for how to most accurately recreate a sonic environment. For this event, we have created an electronic rendition of Shostakovich’s Op. 122, mvt. VII for the purpose of dismantling it in five phases.

We began by following all of Shostakovich’s instructions – pitch, rhythm, tempo, dynamics and expressive quality – as closely as possible. We then stripped the pitches away from the piece one triad at a time, replacing these tones with pitchless sounds.

This movement begins in F major, moves through a tonally ambiguous section and then ends in clear F minor. The first phase of dismantling removes the E-flat major triad (Eb-G-Bb), which is structurally distant from F major but is closely related to F minor, and thus removes an important portion of Shostakovich’s theme. The second phase does away with the B minor triad (B-D-F#), a chord that is foreign to both F tonalities. At this point, the F major and F minor chords are still intact and the overall movement from the former to the latter is still clearly audible. The third variation removes the A major triad (A-C#-E), leaving only the F minor triad (F-Ab-C) audible. By the final variation, only the rhythmic scaffolding of the piece remains.

Many thanks to MEDIATE for the generous loan of equipment.