Occasionally I speak in public on spatial audio, the evolution of art + technology, and related topics.  This can take different forms — conferences, symposia/panels/workshops, sometimes an interview.  Some examples are included below.

An architectural exhibit on temporary structures hosted by the Department of Architecture at Proxy.  My talk was on sound as ephemeral structure.  Here are my slides.

Emily and I also created a sound piece for this exhibit.  You can find it here.

A two-day conference at Swissnex with some of the foremost experts on music and emotion cognition.  My slides are here and video of my invited talk is below: 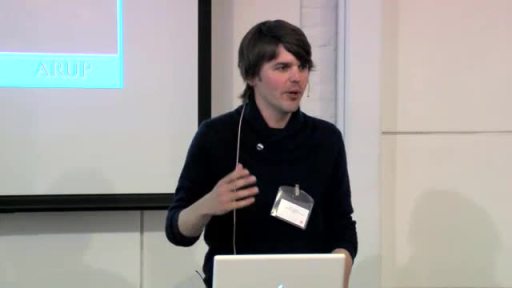 This was a panel at the SF Urban Prototyping festival, about how some of the prototyping philosophies of silicon valley could be applied to urban design.

Art, Technology and the Environment

A symposium at Swissnex with folks from the ICST, University of Graz and some Bay Area luminaries.  Very exciting conversation.

Another panel, this one hosted by Mediate at the Intersection for the Arts in SF.  Again, fascinating conversation, and fine company.

I was very flattered to have been invited to lecture as part of this series.

An article written by Marc Weidenbaum for the art practical blog — interviews with Barry Threw, Scott Snibbe and yours truly.

The impact of visual cues on auditory perception

My graduate research at RPI was focused on multisensory perception, particularly this topic.  I co-authored a paper published in the Journal of the Acoustical Society of America as part of that work.

An interesting panel discussion centered around the topics of the future of audio technology, sound art and the role of technologists in the realm of composition. Cool!

This is a workshop I lead occasionally which is focused on the production of immersive audio.  Specifically, we talk about ambisonics, because that’s what I have available (which is amazing).  The workshop is held at Arup, facilitated by GAFFTA, and turns out to be a really interesting discussion with some very savvy spaced-out sound folk.

I was here with Engin Ayaz, Sha Hwang and Zain Memon.  We were invited to speak about the TV/TN project, which was lucky, because Tokyo is wonderful.  Our work was published in the IEEE digital library.

I went to Cancun and Tokyo for conferences within the space of a month!  At this conference, I presented on Contemporary Theatre Design on behalf of Arup.  What a bizarre place Cancun is — why doesn’t anyone swim in the beautiful gulf?  why do they swim in pools just yards from it?